Hanuman, the monkey god is believed to be another one of Shiva’s incarnations, like Shiva Nataraj we highlighted last post. Hanuman symbolizes pure love, devotion, strength, persistence and shows us that we have gifts beyond what we think we are capable of. There are many different stories about Hanuman, told in many different ways. I will share one of my favourites.

It starts with Hanuman’s mother Anjana. She desperately wants to become a mother, so she prays every day for a child. The god of the wind, Vayu hears her prayers and decides to fulfil her wish by sending her rice grains that made her conceive. Her son was born and called Anajaneya (son of Anjana), he was half human and half god, since Vayu, the god of the wind was his father. At times, being half god with special powers brought him into trouble. One morning he woke up and saw a mango floating in the sky or that is what he thought it was. Of course it wasn’t a mango but the sun, Surya. When Surya saw Anajaneya coming after him he threw a lightning bolt towards him. Anajaneya was wounded in his jaw and died. Vayu his dad was outrageous and inhaled deeply to breathe in all the air on the planet which made all living beings gasp for air. All the gods came together to deal with this emergency. They all decided to bring Anajaneya back to live under a new name: Hanuman (hanuh = jaw). He was also cursed with a short memory to make sure he wouldn’t remember being half god with special powers to prevent him from causing more harm. He wouldn’t live with his mother anymore but with the apes in the forest. That is why he transformed into an ape to better fit in with his new family.

One day Hanuman met King Ram and instantly felt a connection and made a vow to never leave his side. Ram is married to Sita, a beautiful woman with heavenly qualities. The demon King Ravana is jealous at the couple and decides to start a war to take over the kingdom. He kidnapped Sita and brings her to the island of Lanka. Ram is busy with protecting his kingdom that is why Hanuman sets out to free Sita. Hanuman has no idea how, since he doesn’t remember he has special powers. From a place of pure devotion and love for Ram he manages to overcome his own doubts about his capabilities. When he arrived at the shore with the Island Lanka in his vision he kneels down into hero pose, Virasana to pray. Hanuman closed his eyes and asks for support to help him accomplish the impossible. When he felt he had enough energy, he pressed his feet into the earth and took his famous leap to the island of Lanka.

“It was the greatest leap ever taken. The speed of Hanuman’s jump pulled blossoms and flowers into the air after him and they feel like little stars on the waving treetops. The animals on the beach had never seen such a thing; they cheered hanuman, then the air burned from his passage, and red clouds flamed over the sky.”

The yoga pose Hanumanasana (full spilt) mimics Hanuman’s famous leap from the southern tip of India to the Island of Sri Lanka. I personally love the stories behind the asanas. It is inspiring to know what the story is behind the posture and it also gives the pose another dimension then just the physical plane. The above described story comes from; Myths of the Asanas: The stories at the Heart of the Yoga Tradition, by Arjuna van der Kooij & Alanna Kaivalya. They have more stories about Hanuman, as well as other yoga asanas. I highly recommended this wonderful book. 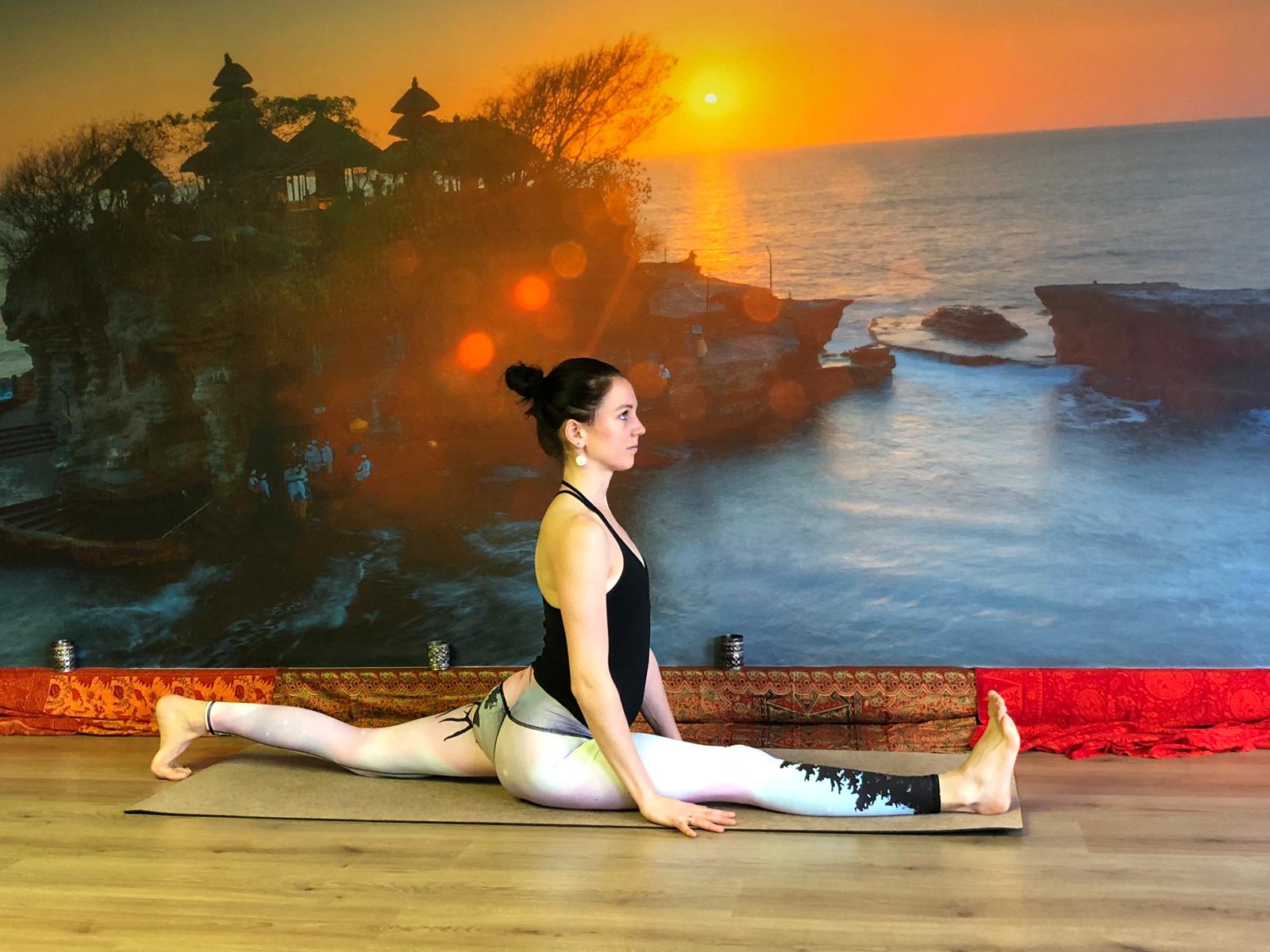 The pose Hanumanasana can bring up all kind of associations and emotions for you. Dislike or like? Stillness or agitation? You might desperately want to get into the full expression of the pose, even though your body proportions will never allow you too without causing harm. Can you be content with your journey towards the pose without attachment? Can you still breathe and smile while finding your edge in the (half) spilt? I can tell you one thing for sure; if your pelvis is touching your mat it doesn’t make you any happier or reward you with more yoga points. The biggest thing that is affected is probably your ego (and possibly your hamstrings and hips). As a yoga teacher, I don’t really care where you are in the pose. For me it is more interesting and inspiring what the pose is doing with you? Can you continue to breathe and believe in your own strength and possibilities while being in the midst of the intensity of the pose? And when you step of the mat, can you continue to stay connected with your heart and focus your mind when in the midst of challenges and struggles? These questions are symbolising the strength and healing powers of yoga to me.

Only you know what you can learn from Hanuman. One of his qualities, keeping a sense of humour and lightness under all circumstances is a powerful one for me. However hard the situation is you are in right now, can you also stay light and see the humour in every circumstance, maybe not in the midst of your struggles, but in hindsight. Hanuman also symbolizes our mind. The unpractised mind is like a drunken ape stung by a bee, also called the monkey mind. When our mind is focused, we can accomplish anything. For me this is a reminder of the strength of our mind and to keep our mind focused through meditation and asana practice, the full spectrum of yoga. To not let your crazy thoughts lead you all the time, instead connect with the devotion and deep love and strength of your inner Hanuman. You could see Hanuman as a reminder to be devoted to your own heart that is leading the way.